At this time of the year, as we remember those who gave their lives in service to their country, it is fitting to bring this to your attention.

A local lady has been painstakingly trying to unravel the mystery of a name on the Hawarden War Memorial that we have referred to before on the WLS site. Her name is Mavis Williams and she is to be congratulated for her efforts. I believe she has proved beyond doubt that David E Jones, remembered on the War Memorial, should commemorate his son, David Henry Bray Jones, both formerly of No. 1 North Green, WLS, Sealand.

Hopefully, this innocent mistake can be rectified in the near future in order to get the right person on the monument. We should add that this takes nothing away from the valuable service to his country that was given by David E Jones during WW1 as Mavis states in her work.

I have been sent a photo by Rachel who wants to know if anyone remembers her grandfather’s family living at 38 Leechpool. In the 1939 Register (similar to a census), David Parry Jones and his wife with their son Thomas Parry Jones, who is a 12 year old schoolboy, are living at No. 38. 3 other records at the house are redacted. Here is a photo of Rachel’s granddad. 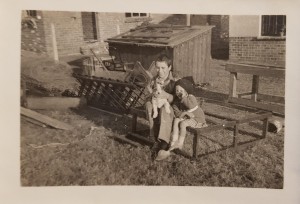 The Church Warden of St Bart’s, Jennifer Watson, is keen to invite all Welsh Land Settlement descendants and all those locals with an interest in catching up to join her at the Church on Friday 21st June from 2:30 pm. I would ask that you kindly support Jennifer as she does a superb community job in keeping alive the memories of our ancestors and their lives on the WLS at Sealand.

Please click on the poster text below to open it up.

Whilst doing some family history recently I was able to access the 1939 Register which was taken at the outbreak of WW2 in September 1939 as an emergency census. Not all people are shown on it as many names are redacted although it gives a good insight into the people who were most of the original settlers and their families. So far I have transcribed West Green and it is set out below. If any of their relatives have some stories to tell and or pictures they would be more than welcome. UDD stands for Unpaid Domestic Duties.

I was pleased to receive an email recently from Emma Price of Art, People, Place who is coordinating the provision of a new playground at Fferm Goch. Emma has been in contact with me as she is building the history of the Welsh Land Settlement into the theme of the playground. The signage will include a QR code that can be read by a smartphone, which takes you straight to our blog. That’s a wonderful tribute to all those with WLS memories, whichever settlement you are from, as it will encourage more and more people to learn about our families through those difficult times. Thank you Emma and we look forward to receiving pictures of the playground when it is opened in the near future.

Can anyone help Peter with his research, he wrote:

“I am researching soldiers from Buckley or with a connection to Buckley who died in WW2, and came across David Henry Bray Jones. According to a newspaper obit he was the son of Mr & Mrs Jones of 1, North Green. I believe his wife was Esther Garner and she lived in Belmont Crescent Buckley. I think he was born in Llandilofawr. I see from the 1939 Register and your records that the Bray family was at 1, North Green in 1939. Does anyone have anything to add to this story?”

I found this old photo that some of you may be able to identify some of the ladies in the group. Of those standing 6th from the left in her scarf is my Nan, Kitty Jones, and 7th from left is Auntie Elfie Jones (nee Kennedy). Is that Louisa Jacobs 8th from left standing and Cassie Lewis 10th left standing? Are they the Tiller Girls (London Palladium) seated?

Come on, let’s identify all 18 of them. Where and when was is taken?

Best wishes to everyone in Wales and those further afield with Wales in their hearts, have a lovely snowy St David’s Day. Our concert at Abergavenny Borough Theatre with Blaenafon MV Choir has been postponed until 5th April – somehow that won’t feel quite the same.

It was with great sadness that I learnt of the death of our friend from his niece. His funeral was held last Monday, 5th February. He was diagnosed some years ago with motor neurone disease and he decided to write his life story for his family. Stuart’s contribution to this blog and the book were so well received and working with him to include his extracts from his life on the WLS at Boverton was a real privilege. Please take the time to read his story whilst visiting this site in memory of Stuart. Here is a poem he wrote that recounts his early days on the settlement, just two verses but very poignant.

Stuart’s story begins on page 63 of the book.

Some time ago, when I published the list of original settlers at Sealand I only did North and South Greens. With apologies to those who have family interest in the other Greens I am now setting out the list of those who came and lived in East and West. Apologies if it’s not quite correct, for example my Auntie Elfie moved to Sealand from Aberdare and lived with her parents in North Green but she is shown here a little later on living in East Green with her husband my uncle Jack. REMEMBER DOUBLE CLICK ON THE FILE AND YOU WILL GET THE FULL SIZE ON SCREEN.